San Francisco, CA — CAA is disappointed in Monday’s U.S. Supreme Court decision that enabled the Trump Administration to implement the expanded public charge rule. The policy is widely contested and, while the Supreme Court’s decision lifted the injunctions on procedural grounds, ongoing litigation continues. Final decisions from the Supreme Court on the validity of the program is anticipated in March.

The “public charge” test is a set of guidelines the government considers when determining whether immigrants could become dependent on government assistance. The proposed changes will likely impact a narrow segment of immigrants who are seeking to adjust their status in the U.S. Although limited in scope, the expanded rule has the potential to restructure our immigration system in favor of the wealthy by falsely creating fear and confusion to deter low-income immigrant families from accessing necessary public benefits.

The decision is preliminary, but will put into effect the harmful policies to penalize immigrant families for accessing life-saving programs and public benefits. CAA urges community members to stay informed and seek consultation from trusted providers and attorneys before making any decision regarding their families’ health and future.

“All immigrants regardless of their wealth and status are deserving of dignity, compassion, and reunification with their loved ones. And we believe those to be our principles as a community and of our immigration system. The Administration’s effort to refashion a relic of racist xenophobia highlights its own political agenda to demonize immigrants and reinforce problematic stereotypes about poor communities of color and people with disabilities,” states Amy Lin, CAA’s Immigrant Rights Co-Program Manager.

Communities and advocates responded with unequivocal resistance and solidarity through public comments and lawsuits, and blocked the expanded rules from taking effect since 2019.

CAA’s Director of Advocacy, Hong Mei Pang, states, “This decision is a temporary setback in our fight against public charge rule change. We will continue to stand with immigrant communities, and vocalize our opposition to any efforts that seek to criminalize low-income communities of color, especially those who are already vulnerable under this Administration, and people with disabilities.”

CAA has been partnering with local government and community-based organizations since the policy was published to ensure that immigrant families understand their rights and can effectively manage their risks by accessing legal services in San Francisco.

We urge community members to consult trusted providers and attorneys with any re-consideration of life-saving programs, such as Medi-Cal and CalFresh (SNAP) in fear of negative immigration consequences.

Community members who are interested in learning more are encouraged to contact CAA’s Immigrant Rights program at 415.761.3222 for general inquiry and legal referrals regarding how the public charge final rule might affect them.

Chinese for Affirmative Action (CAA) is a community-based civil rights organization in San Francisco.  Our mission is to protect the civil and political rights of Chinese Americans and to advance multiracial democracy in the United States. We advocate for systemic change that protects immigrant rights, promotes language diversity, and remedies racial injustice.

San Francisco, CA — CAA joins immigrant rights organizations and directly impacted community members in urging the Supreme Court to uphold the continuation of the Deferred Action for Childhood Arrival (DACA) program. All immigrants, regardless of their immigration status, have…

San Francisco, CA — Today’s ruling by U.S. District Judge Allison Burroughs in Students for Fair Admissions (SFFA) v. Harvard is an important victory for those who believe colleges and universities must value inclusion, diversity, and equity. “Affirmative action has…

San Francisco, CA — The Trump Administration announced new “public charge” rules that will increase hardships for working-class immigrants and unfairly restrict future family-based immigration. The new rules, which go into effect in two months, have been opposed for months…

SAN FRANCISCO — Chinese for Affirmative Action (CAA) condemns the Trump administration’s plan to deport and detain immigrant communities, locally in the Bay Area and nationwide, and advises community members to access legal and supportive services available through CAA and…

SAN FRANCISCO — Chinese for Affirmative Action (CAA) condemns the ongoing threat of the Trump administration’s plan for massive raids to deport “millions” and advises community members to access legal and other resources available through CAA and its partners.  “This is…

San Francisco–  The U.S. Supreme Court issued a ruling today to block the citizenship question from the 2020 Census survey.  CAA applauds the ruling as a victory for democracy and the civil rights of immigrants and Asian Americans who would have… 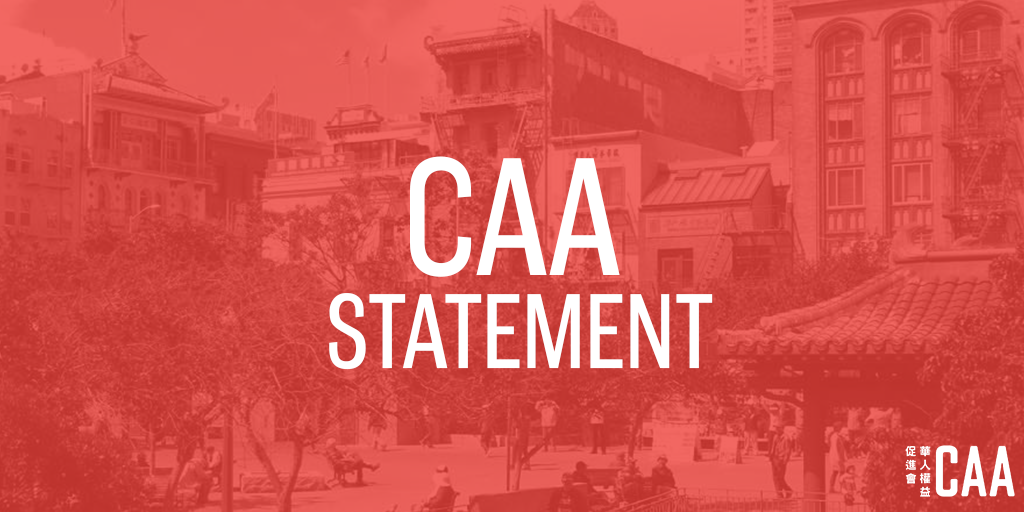 CAA makes a real difference in the lives of community members every day. Please join us in the cause of civil rights by making a donation now.