Chinese for Affirmative Action (CAA) along with community members and advocates across the country express our disappointment and frustration with yesterday’s Supreme Court split vote on an injunction which has unnecessarily stalled the implementation of expanded DACA (Deferred Action for Childhood Arrivals) and DAPA (Deferred Action for Parents of Americans and Lawful Permanent Residents). In the Court’s 4-4 decision on U.S. v. Texas, the Supreme Court upheld a lower court’s initial decision to enjoin expanded DACA and DAPA, meaning that the programs will remain on hold, leaving millions of people at risk for deportation and family separation. The new programs, announced by President Obama in November 2014, would have protected more than 5 million immigrants from deportation while providing work authorization for renewable 3 year periods. Approximately 400,000 APIs would have benefited from these programs.

“This was a missed opportunity for the Supreme Court to take a stand against the hatred and xenophobia that has prevented humane, just, and common sense immigration policies from passing in Congress,” said Annette Wong, Director of Programs at CAA.

The original 2012 Deferred Action for Childhood Arrivals (DACA) program is still available and is NOT affected by the Supreme Court decision. Eligible immigrants can continue to apply for and renew their 2012 DACA in order to access its many benefits, including a temporary 2 year reprieve from deportation and a work permit. “We encourage community members, if you have questions about your immigration status or feel you may qualify for 2012 DACA to please come see us at CAA,” said Michelle Yeung, Community Advocate at CAA.

While the decision is a disappointing setback, CAA will continue to work with our partners across communities to push for real solutions that protect and uphold the dignity and humanity of all immigrant communities and families. Specifically, CAA has redoubled its effort to reach the estimated 13,000 undocumented API immigrants and 30,000 naturalization-eligible Chinese immigrants who reside in San Francisco.

“Expanded DACA and DAPA were temporary measures intended to help some undocumented individuals in the context of a very broken immigration system that continues to separate families and attempts to divide our communities. This decision is frustrating but our immigrant communities are resilient. We will continue to fight for broad systemic changes that promote our values of inclusion and compassion until all our immigrant communities can live with dignity and are free from the fear of deportation,” said Hong Mei Pang, Immigrant Rights Community Advocate at CAA.

SAN FRANCISCO, CA – Chinese Hospital, with over 100 years of service to Chinatown and San Francisco, exceeded the 25% goal of hiring local construction workers to reach 29% in the building of the new hospital. The project gave construction…

Chinese for Affirmative Action strongly supports Assembly Bill 1726 (Bonta), the Accounting for Health and Education in API Demographics Act (AHEAD Act). AB 1726 is a critically-needed effort to unmask Asian American and Pacific Islander (AAPI) subgroups, and to identify…

Chinese for Affirmative Action Statement on Ruling in Texas v. US to Delay DACA and DAPA

Earlier this week, a Texas judge, well-known for his anti-­immigrant views, placed an injunction on President Obama’s immigration actions announced in November 2014. This injunction defies legal precedent and we expect it to be appealed and overturned shortly. The ruling…

San Francisco, CA — Today, Asian American and Pacific Islander community organizations from around the country, including Chinese for Affirmative Action in San Francisco, sent a message to the White House to use all of its existing legal authority to… 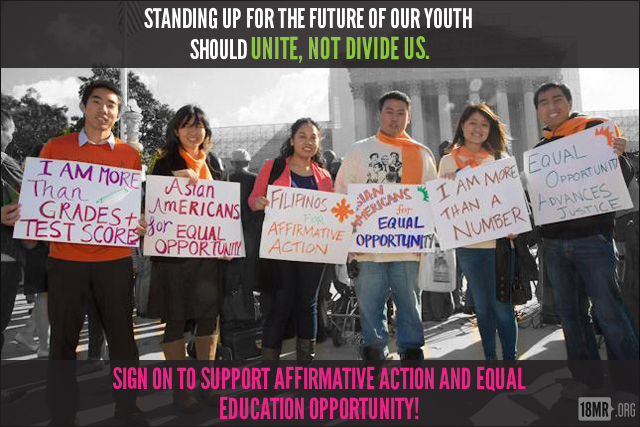